Thos Begbie only uses 99.99% pure copper with an IACS conductivity of > 90% as its source of copper for both slab and cast coolers.

Copper has been used by humans for about 12 000 years! The island of Cyprus was a major source of copper for the ancient world. The word copper comes from cyprium, later cuprum, the Roman name for the Cyprian metal.

A huge deposit was discovered in 360 BC in SW Spain. The copper and iron discoloured the nearby river, called the ‘Rio Tinto’ as a result. The mining district was also named Rio Tinto.

A copper bar can be heated, rolled and drawn into wire as thin as a human hair.

Copper is corrosion resistant, non-magnetic and antibacterial and is widely used for electrical and communication components, as well as in heat exchangers.

Copper, when alloyed with zinc or tin, makes brass or bronze.

The first known coins minted by Julius Caesar were made of a copper-zinc alloy, while Octavianus Caesar used Cu-Pb-Sn alloys, and the legend of the first galvanic battery using copper soldered to lead, goes back to Baghdad in 226 AD.

Some properties of copper explained 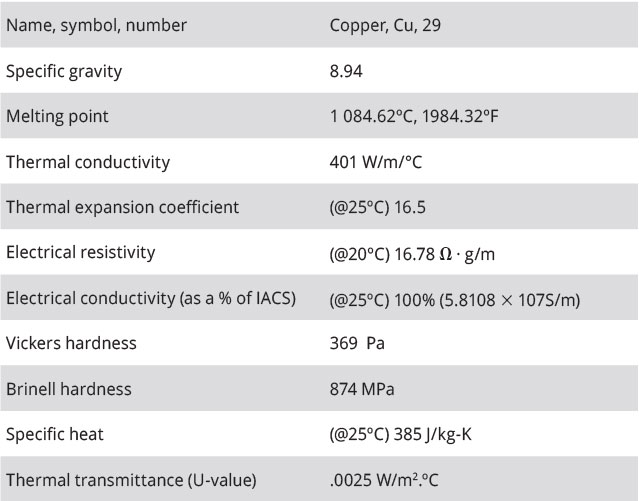 Found what you are looking for?

How can we help?